← back to
Kung Fu Records
Get fresh music recommendations delivered to your inbox every Friday. 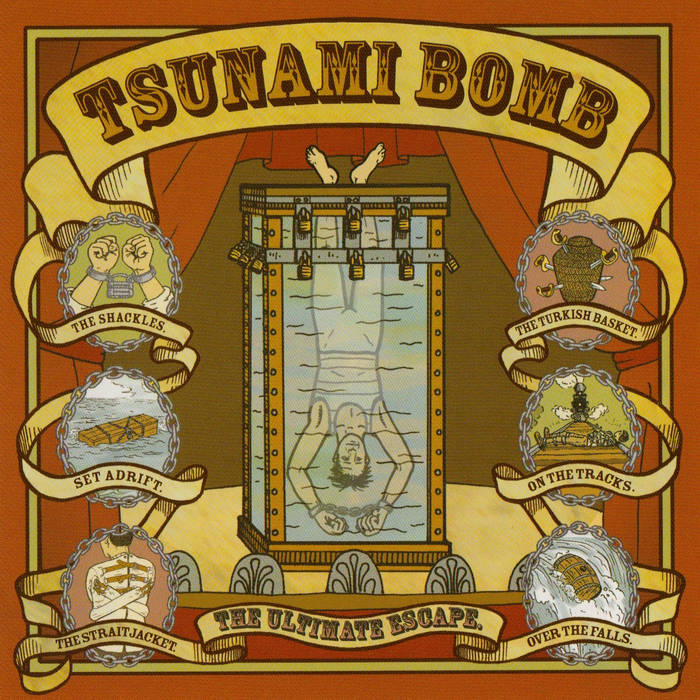 E.D. Show Fanzine Love this band. Come back on the show. Cheers

Allmusic.com
Review by Johnny Loftus
"Tsunami Bomb has shortened the fuse for its first full-length on Kung Fu, hacking off the keyboards that marred 2001's Invasion from Within and concentrating instead on uncoiling Agent M's explosive vocal presence over an album's worth of boisterous brass-knuckles California pop-punk. While it offers much more than head-rush instant gratification, Ultimate Escape's initial salvo is quite formidable. "Russian Roulette" douses its Andrews Sisters-style vocal harmonies in a punk rock solvent worthy of the Turbo A.C.'s, and establishes a fun, freewheeling call-and-response vocal style between the beguiling M and her band of dudes. The same sound dresses up the raggedy new wave tour van anthem "Roundabout," and also saves "Top 40 Hit" from crossing the median into cliché. The latter song's anti-corporate message rant is admirable (and true), but its vicious hardcore riffing might have been better served without the baggage. But that's a minor misstep on a record full of face-punching riffs and vocal hooks that just beg to be shouted at shows. "20 Going On...," "Headlights on a Hand Grenade," and triumphant, pogo-worthy closer "In This Together" are all standouts -- the latter might feature one of M's most powerful lyrics. "I can't even convey how safe I am (when you're around me)," she sings, and it becomes as much a dedication to a partner as it is a thank you to the fans. That's probably the greatest thing about Tsunami Bomb and Ultimate Escape -- the band's joy at playing is infectious, inherent, and totally ridiculous. It pushes their music past generalized comparisons to Green Day or any rock band that was ever fronted by a woman, and makes their record something more than another series of anthems and chord changes -- it's an escape from the mundane and the moneybags."

Founded by Dominic Davi and Oobliette Sparks in 1998, Tsunami Bomb came out of the Northern California punk scene based around Petaluma, CA. Getting their start from AFI bassist Hunter Burgan's label Checkmate Records, and later Tomato Head Records, Tsunami Bomb would release a number of limited run EP's before signing to Kung Fu Records in 2002. ... more

Bandcamp Daily  your guide to the world of Bandcamp